My latest PRO FOOTBALLER work came in from Stephen and Amanda Main, for their 3 football crazy sons, Lucas, and their twins, Alex and Harry. The three of them play for Bournemouth Sports FC for their respective age groups, so wanted to capture them in their team colours.

If you've seen my PRO FOOTBALLER work, you'll know it has a certain look and feel to it. I don't tend to do cheesy smiles in any of more, and whilst my PRO FOOTBALLER shoots tend to be with junior players, this doesn't change. I want the players to look like they mean business. Real serious because when I add them to the backgrounds, I purposely add in more drama and impact to the pictures aswell. Heavy clouds, lots of detail etc.

So, it's always great when my clients share this vision and totally get the look we are aiming for, and Stephen, Amanda and the boys totally nailed it. No warming up was needed, once the lights were setup and we got the player positions organised, the boys were on form behind the camera pulling out several awesome poses!

Even though shooting three players, I tend to shoot each player individually and then bring them together in photoshop. Once the favorite three pictures were selected, I produced a quick test shot cutting the players out very roughtly, positioning them on a background and then reviewed with Stephen and Amanda to make sure positioning and sizing of the players works. Then onto the processing side. I'm not going to talk any further on this, instead I've created a very short video that shows the out of camera pictures, the background and then the different steps I went through.........

Here is the final image added to the black mount that I put these on for print. 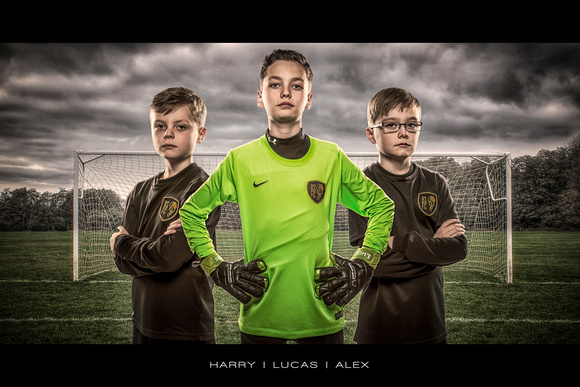