I wanted to share a new addition to my portfolio. This is a concept I've had in mind to create for a while now, having captured some cool shots of model Matt Holbeche a while ago, looking sophisticated in a suit. 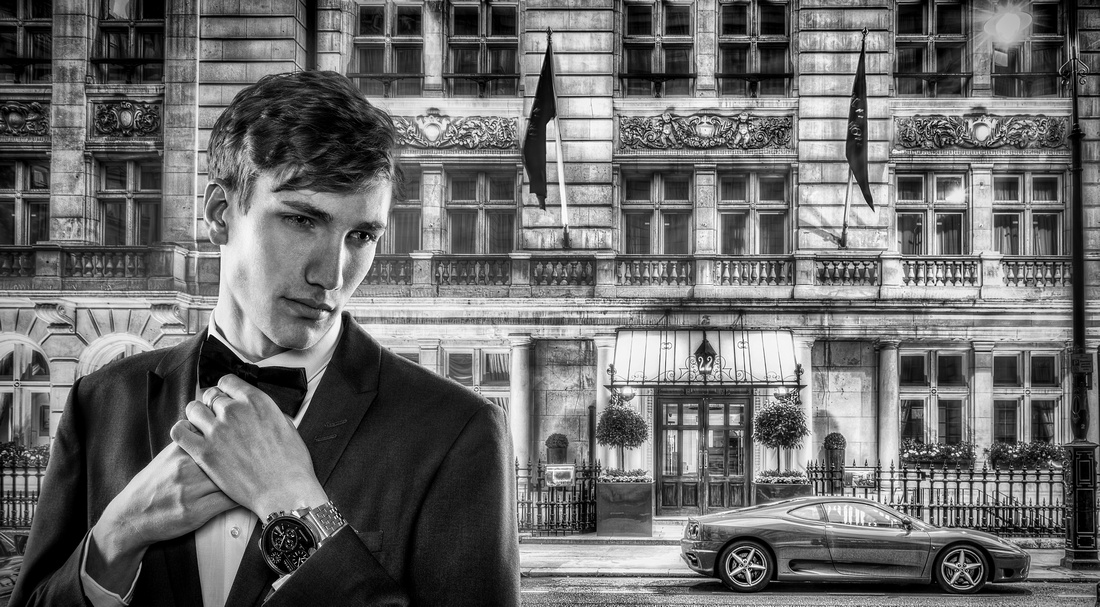 The background was captured in London, where I landed on my feet a little, as the concept for this shot was to always have a slick flash car in the image, and a few mintues before shooting the background, I had photographed a fully loaded Porsche ready to cut out and drop in. However a Ferrari was parked right outside, setting the perfect scene, and making my life a little easier. :)

The portrait itself was shot in studio, with rim lights hitting the side of Matt's face to help blend into the street light at the top right of the picture. Accessories help add to a shot. I always tell people to accessorize, and the watch in this was perfect and adds to the look and feel of the shot.

In terms of processing, I had to do quite a bit of work on the background, including cutting out movement blur on the flags, removing blemishes and enhancing the highlights and shadows on the Ferrari, including darkening down tyres and making the alloys pop a bit. I added effects to bring out the textures in the building and added more light effects coming from the street lamp. I played around with the positioning of Matt a little aswell. I tend to shoot close up a lot as love to capture details and expresions in the face, so I pulled him close to the front of the image and enlarged as if he were standing right in front of the lens at the scene. Normal retouching applied to skin, eyes, clothing and then finally I applied a black and white conversion. I've been doing quite a bit in black and white recently. Here I think it helped bring the whole piece together better, and with the black suit, black bow tie, white shirt, dark watch etc, I think it worked.

I hope you like. Thanks to Matt Holbeche for bringing the coolness to this project aswell - he totally nailed the look I was after. More project work with him to follow soon so keep an eye on the blog.